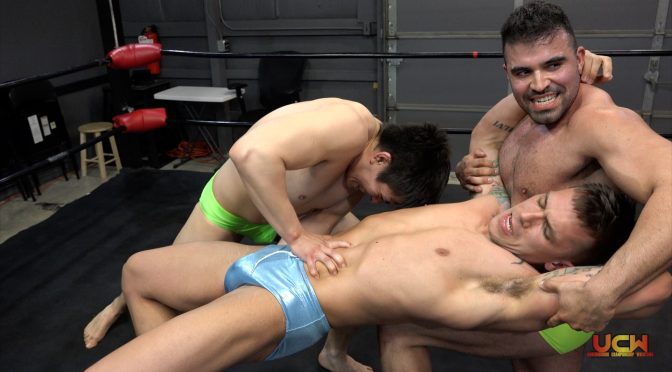 Nero wants to teach fellow bad boy Anton the finer tactics of dirty fighting. So, he paid big bucks and rented Eliot to use him to do just this. Eliot feeling very confident in his abilities, decides he can take-on these two fellow UCW heels. Then the fun begins, the bad boys bring lots of double teaming, and the lots of dirty tactics, you will end up feeling sorry for Eliot’s balls. But Eliot has his moments, he suddenly becomes John Cena with a little Jackie Chan mixed in. Eliot faces these heels and knocks heads together. We will see some great moves from him, but will it be enough? Nero makes sure that we have a nice view of Eliot’s perfectly shaped bottom! That alone is worth the price of the download! Feel free to send in a thank you note to Nero for the butt fun.  – Michael “BodySlam”

“Anton and especially Nero don’t fancy the idea of living in Eliot’s shadow, so they’re doing something about it. The question is Will the two of them be enough to take down the calm, confident, and composed stud muffin?” – Ringside at Skull Island