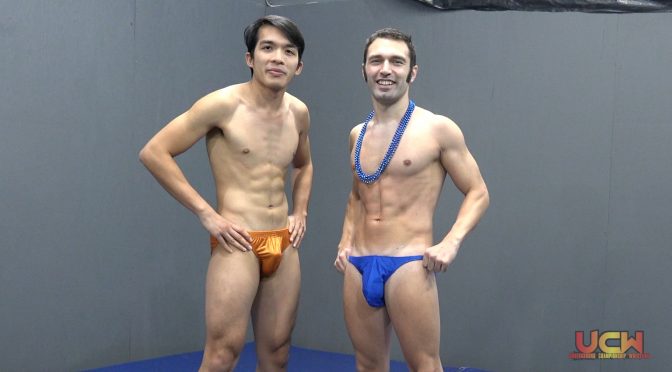 I really like the picture of Cai Li and Zack.  The looks on their faces say so much.  Cai Li looks like the cat who swallowed the canary and indeed he had his hands playing with Zack’s assets. The amazing thing about this match was Cai Li had no reservations about going for the “beads” by grabbing Zack’s balls and dick with pleasure. Zack rarely grabs another guy’s balls although he will kick or knee his opponent’s balls.   While he doth protest a great deal, Zack enjoys (if not invites) his opponent to grab his balls and dick. Zack’s erotic shivers whenever someone’s hand is groping his jewels.  So hot.  After all he showed Cai Li his assets at the beginning as something to be desired or prized.  Kudos to the camera man who gave us Zack’s head and shaft at different moments.  Zack is going to tease, meanwhile his opponents are grabbing the shaft to please the viewer and Zack.  It was interesting the way Cai Li was patting Zack on the head like he was his pet dog at the beginning.  Such confidence. Your fan – Bob