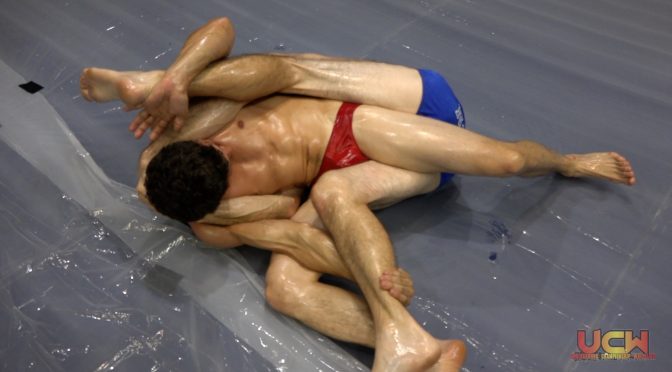 Michaels outdraws his opponent, literally sweeping the boy off his feet. Wolf Boy puts up a speedy defense, and we’re off! The two embark on a rough and captivating battle of wits and muscles, while gingerly steering their way around the challenges of oil wrestling – principally, the absence of traction. – Ringside at Skull Island

Chase very equipped to handle anyone in an Oil match. Wolf Boy is the newcomer here, in fact it’s his first UCW match. Chase has 2 oil matches under his belt and is a clear UCW veteran. Looking at their bodies they seem kind of equal, Chase is a bit taller, and Wolfe has a bit of a bigger chest and has the bigger package of the two. But he will tell you himself that it’s all balls. Don’t worry you will see for yourself in the match, yes there is a bit of nudity in the match. Oil is the great equalizer for all oil matches.  So, there is a lot of slipping and sliding so hard to keep a hold on. And sliding gear. This match is hot and sexy, and the gear slippage just makes it more fun. – Michael “BodySlam”